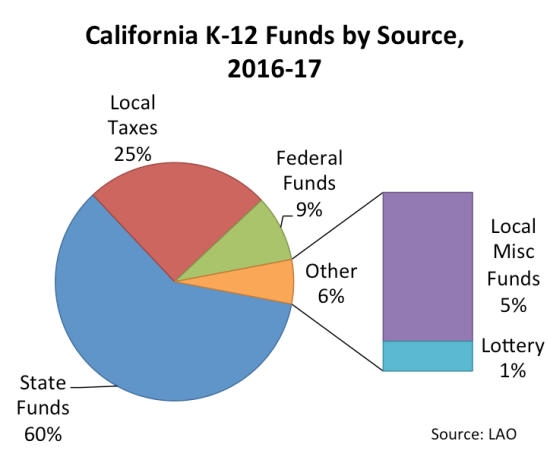 Source-  Ed100 article on the revenue for the school districts.

California school districts are funded by the

So different school districts get different LCFF. The San Ramon school is fourth lowest funded LCFF in the state and is 75% of the total funds.

The core source of risk of this funding is the state’s deep dependence on volatile revenue from capital gains.

The last 2008 recession had significant impact on the state revenues and the Obama administration along with Republican support bailed the states with emergency funds.

Local taxes (25%)-  Property taxes fund a quarter of the costs and are not the main source as one would think. Most of the other states rely more on property taxes

Federal funds (9%)- are earmarked for specific things. The largest federal grants are for disadvantaged students (via the federal Title I program) and special education students (via IDEA, or the Individuals with Disabilities Education Act).

Other local funds (5%)-  interest income, leases on unused properties, parcel tax proceeds, donations, and a host of other miscellaneous sources

Lottery (1%)- Lottery funds of $150 per student are uniformly distributed.

The Serrano vs Priest case successfully challenged and won increasing the state’s role in determining funding.  You can see below that local property taxes contribute 25% in 2019 versus 60% in 1970.

What does it mean for the future of public education?

It is unfortunate that teaching is no longer considered a lucrative profession. The 2018 PDK Poll conducted the public attitudes towards teachers asking a question.

Would you like your child to be a teacher?

54% percentage of the parents responded that they would not like one of their children become a teacher.

When asked the below question, some of them responded

“Why would you not like to have a child of yours take up teaching?”

“Teaching seems to be more of a thankless job these days because so many kids are just going through the motions and not committed to learning.”

“They are not paid well. In our community, a teacher has a hard time owning a home.”

“The teachers get treated like crap if kids aren’t up to par on the testing scores. They also don’t get paid enough. It’s sad we pay more to guys running back and forth on courts and fields than we do to the ones we entrust with our children.”

If this is the state of perception of teaching as a career, how can we get a new pipeline once our experienced teachers retire. It is essential that we need to community organize for advocacy to prevent a crisis for future generations.

One of the potential solutions is if we have a higher statewide taxation in order to support higher statewide investment in public education. Each $1 billion raised at the state level in California is approximately $160 per student.

California is many thousands of dollars per student below top-funded states like New York. This state is not, in the aggregate, a high-tax state — and when it comes to education it is a low-effort state, far below most. 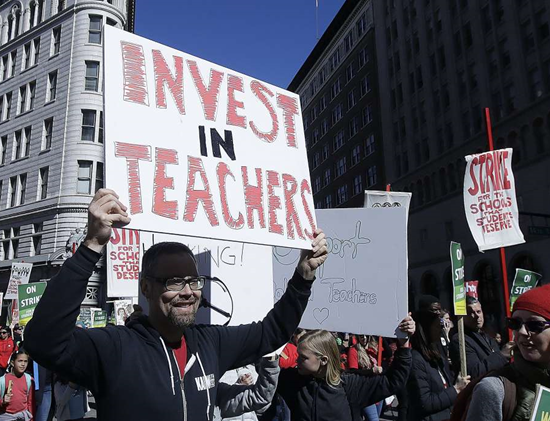